I had a wonderful time this weekend meeting the amazingly beautiful and very talented Stefanie B, and her dog, Billy Lee, at their lovely apartment in NYC. It was a rainy dreary March day in New York. But as soon as I met Stefanie, I felt an instant ray of sunshine and a real warmth that lasted well into the night. She is literally one of the most beautiful people I have ever laid eyes on. So much so that it is hard to believe that she was ever terrorized for the way that she looked growing up as a biracial Korean child in Korea and then as a biracial Korean adoptee growing up in the states. She has the most amazing dark hair highlighted with shades of grey, which Stefanie proudly owns as her own “fifty shades of grey.” She believes in embracing the beauty that you are at whatever age you are. And that aging can be done gracefully. She has a warm glow with golden skin that looks like we are in the dead of summer. And her smile could stop any man in his tracks. But even more than that, this lady has class, artistic flair, and a beautiful warm soul.

Her apartment was decorated with her own personal artwork and a collection from other artists. She has completed art work for other Korean adoptees, including portraits of them as children with their biological mothers or in their native Korean homeland. These incredible pieces are deeply moving, capturing the emotions behind what it means for an adopted child to be seen with their biological mothers. These portraits are sometimes based on real photographs of biological families taken decades prior. Others are based on memories from greater than 20 years old of what the adoptees remember their biological mothers to look like. Others are based off of only an intuition or a feeling of who these unknown mothers are. Regardless of the inspiration, her artwork never ceases to move me to tears. Stefanie’s artwork is so powerful because it’s often the only portrait that exists of the adoptee and his or her biological mother. All of Stefanie’s artwork is created, under her Korean name, Jacky Lee. 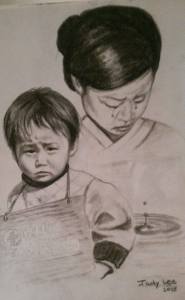 This portrait is a drawing of a young Korean adoptee based on a 1973 photo of her as a baby. A photograph that she only received in 2010. The drawing of her mother, or “omma,” was a depiction that Stefanie portrayed from the heart and essence of this young adoptee, as there were no photographs of the young mother available. Such a beautiful piece.

Stefanie also does 3D Nano eyebrow artistry– transforming brows using a technique akin to traditional Japanese tebori. Stephanie hooked my brows up! We ended the night with a yummy dinner at a local noodle shop. I love New York. And it’s even better experiencing the city with a newfound KAD sister.

While working her tebori magic on my brows, Stefanie shared a few YouTube videos documenting some of her experiences as a Korean adoptee. Stefanie recently returned to Korea this past year through a Mosaic HAPA trip, which was videodocumented on YouTube. We watched the video and the tears were flowing. This video was so touching. During the trip, Stefanie was able to meet a biracial Korean popstar named Insooni. Insooni shared her own story about being bullied for being biracial so much so that she had to drop out of school at age 15. Despite such adversity and racism, Insooni has went on to have a successful singing career and also founded a special school in Korea for biracial children. Growing up as a biracial Korean adoptee, it was often difficult for Stefanie to find real acceptance in Korean circles and black circles both in Korea and in the US. Meeting Insooni and seeing her success despite her differences was incredibly powerful for Stefanie and the other adoptees on the HAPA tour. Stefanie referred to her as her “Hero.”

After meeting and getting to know this incredible woman, I can honestly say that Stefanie is one of my real life heroes. I admire her strength, beauty, and poise. I’ve loved spending time chatting with her about shared experiences as Korean adoptees, and hope it’s the first of many more meet ups with her!